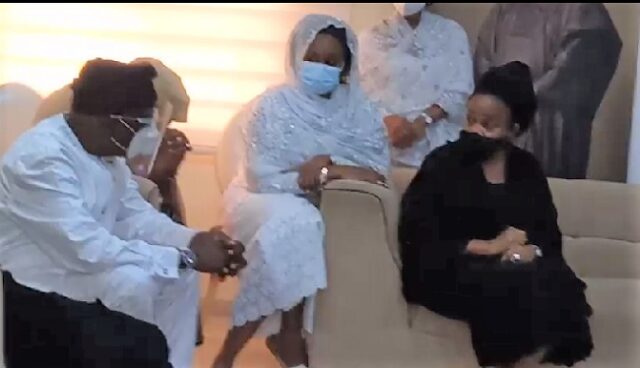 This took place during the visit of Nigerian Governor’s Forum to commiserate with her and the Abiola Ajimobi family.

Mrs Ajimobi complained that the Oyo State Government had not commiserated with the family on the death of her husband.

While addressing the visiting governors accompanied by Oyo State Deputy Governor, Engineer Rauf Olaniyan, the former first lady said, “I think the least anybody can do, as a God-fearing person, is to send me a word of encouragement at this time. And even after he died, not even you, Mr Deputy Governor called me…”

In her expressions, “I read in the newspapers few days ago that the governor of Oyo state Engr. Seyi Makinde claimed to call me and I didn’t pick up; he never paid Ajimobi’s family a visit since my husband was admitted in hospital, neither has he sent anyone nor sent us a message”.

At that point, the Deputy Governor interjected saying, “I called you.”

To which Mrs Ajimobi replied, “You should have sent me a text message.

“I don’t have your number, I can’t pick up. I am the wife of a politician, I don’t pick numbers I don’t know. You can send a message. Everybody is going to die. My husband is dead, and he served this state for eight years. What are we talking about!”

“Do I need to send an official message to the governor to inform him about the death of my husband before he could send us a condolence message or pay us a condolence visit? It is not pleasant to hearings. What kind of politics are we playing?

The late former governor’s wife expressed her grievances and pointed out that her husband didn’t have any issue with Makinde when he was alive, and pleaded that he should be allowed to have a peaceful eternal rest.

She however called on the Oyo state government to stop peddling lies about him and the entire family because he is no longer available to defend himself.

Other governors present intervened by asking both sides to maintain composure.

The late Ajimobi was buried on Sunday morning at his Oluyole GRA, Ibadan residence.

OPINION- PDP and Its Stakeholders: Crying Wolf Where There is None