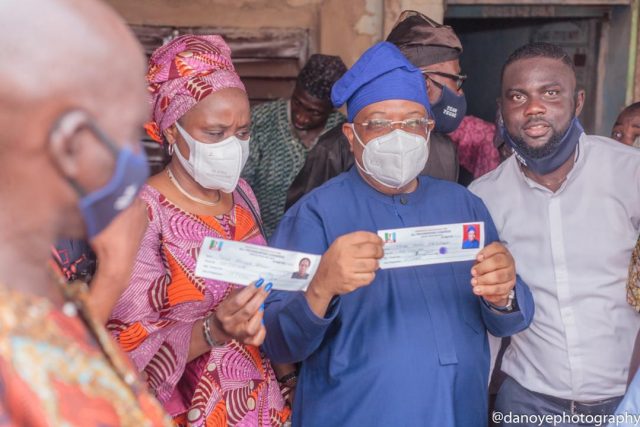 The Mogaji Oguntegbe and Chieftain of the All Progressives Congress, APC in Oyo State, Engineer Joseph Olasunkanmi Tegbe has revalidafed his membership at the ongoing party registration and revalidation.

Tegbe, who arrived at his ancestral home located at Ward 5 of Ibadan South East Local Government area was welcomed by crowd drawn from the 12 adds of the local government who came to solidarize with him.

The crowd lauded his consistent support for the party and most importantly the ongoing party registration.

A party faithful interviewed at Ward 5, Mr Kabiru Akintola said “Mogaji Tegbe is the most consistent supporter of the party in Oyo state. He is a humble man that has provided a lot of help and supported party members across the state. He is a true model for the party and we are happy to have someone like him as a party member and our leader”

Speaking shortly after filling the membership register, Mogaji Tegbe noted that the exercise offered the party an opportunity to consolidate on its reconciliation exercise and expand its membership base. He urged current and returning APC members to revalidate their membership and appealed to progressive minded individuals to seize the opportunity to become full-fledged party members in order to drive the change craved for in the society. He noted that efforts were in top gear to bring in people of value to strengthen the APC ahead of the 2023 Polls.

The APC started her nationwide registration process on February 9 which runs through till the 26th of the same month.

Makinde Inaugurates OYSIEC Board, Promises Not to Interfere in their Activities

Bring Back Our Koseleri, Take Your INAROBO, UI Student Demands in Oyo