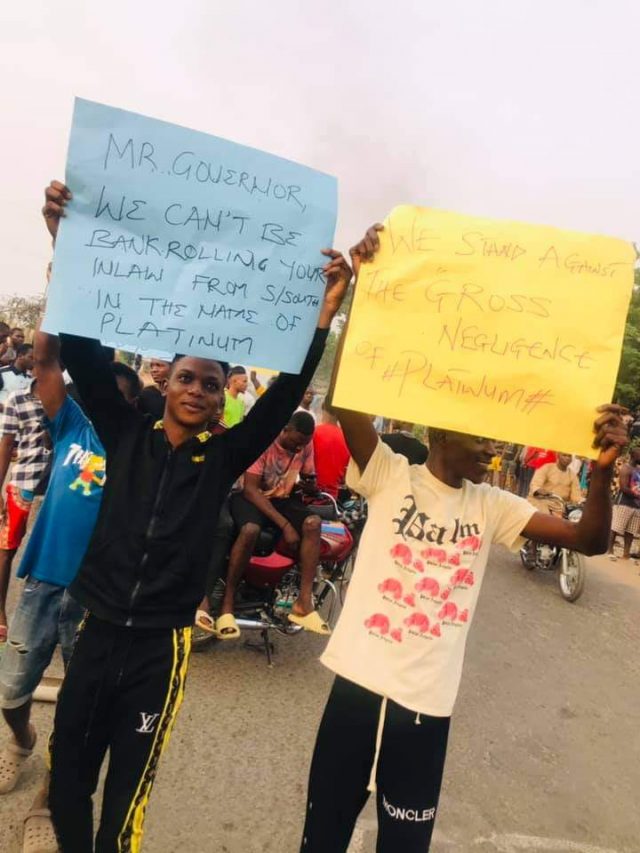 The Students of Adeseun Ogundoyin Polytechnic, Eruwa have lent their voices against the irregular and unusual charges on remita, which was traced to the introduction of consultant managing the affairs of the institution.

As captured in a placard displayed by the students on Monday, 1st March, 2021, “Mr Governor, We can’t be Bankrolling Your Inlaw From S/South in the Name of Platinum.”

According to the students, the state government has handed over the affairs of institutions in the state to Platinum which has brought a major setback to their everyday teaching and learning process on campuses.

The President of the Students Union Government, Comrade Ashaolu Victor Samuel while reacting to some questions from OYOMIND expressed the difficulties the entire institution has been going through in the hand of the consultant.

“This protest is the aftermath of the 72hours ultimatum give to the government to find lasting solution to the exorbitant charges and inefficiencies of the platform (Platinum) which the government introduced to checkmate the financial records of this institution.

“The exorbitant charges of #500 on every transaction made by Students through the Platinum portal is unbearable, and we can not continue to pay that money.

“Delay in approval of request made by the management to Forster the welfarism of the students.

“Hardly do we do practicals in our respective classes, no provision of electricity also to power machines, school clinics are short not taken care of and there’s no health facilities made available.

“If request are made for the provision of these things he rather delay it, it not approve it” he said.

The president who later urged the student to go home and prepare for the examination said that academic activities continue tomorrow.

The Deplorable State of the Nigerian Health System: Maybe We Can Fix This Now?...