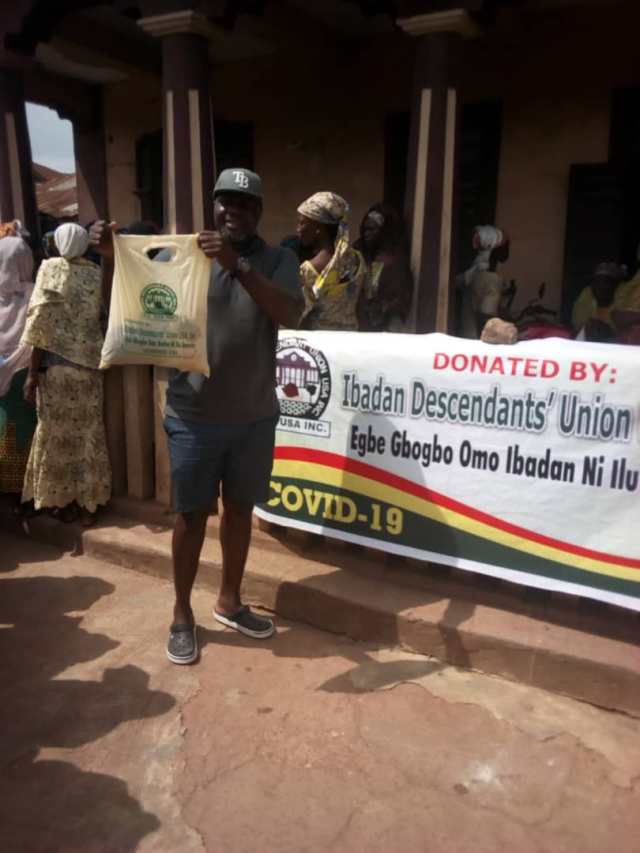 As part of her Ibadan Initiative Project (IIP), designed to take care of three core areas of education, health and community development, which coincides, incidentally, this year with the Covid-19 pandemic ravaging the world, the Ibadan Descendants’ Union, USA, has donated food items which include rice, beans, and semovita to the indigent and most vulnerable residents of Ibadan, today, Saturday, 18th April, 2020 in order to alleviate their suffering during the curfew occasioned by the outbreak of the pandemic globally.

The first phase of the project which took place today covered three strategic locations. The first location at Aleshinloye covered Idi-Arere, Isale-jebu, Popoyemoja, Bode, Agbongbon and Kudeti. The second location near Mapo Hall extended to Mapo, Oritamerin, Oke Dada, Bere, Labiran, Oja’ba and Oranyan while the third location was Ita Baale Olugbode palace, covering Aremo, Agugu, Oje, Yemetu and environs. All the three distribution locations were within Ibadan South East local government area, a part of Ibadan South West and a part of Ibadan North. Other local government areas would receive attention in the second phase of the project.

While speaking on behalf of the National President of Ibadan Descendants’ Union, USA, Dr Olubunmi Afonja, MD, Mogaji Abiola Iyiola, the National General Secretary, who supervised the distribution of the food items, said the gesture from the Ibadan natives in the Diaspora was to reduce the burden of temporary economic downturn caused by Covid-19 outbreak. Speaking further, Mogaji Iyiola said, “We are all aware that this is a trying time for our people at home due to partial reduction in economic activities and in order to identify with their situation, our organization considered it necessary to reach out to the indigent and vulnerable people in our localities.”

Concluding, the National General Secretary, on behalf of all members of IDU, USA, expressed appreciation to BnBallo Charity Concept for making the whole distribution exercise less stressful and successful, free of charge, as he said the exercise would have been in total chaos without the efforts of the charity organization.

More than 500 households benefitted from the distribution of the food items during this first phase of palliative programs by IDU as four people were targeted in each household with a pack each containing rice, beans, semovita and noodles.

While responding, some of those who benefitted from the palliative distribution, on behalf of others, expressed sincere appreciation to the Ibadan Descendants’ Union, USA for extending the magnanimous gesture to them to help them cope with the parlous condition that the pandemic brought upon them as they prayed for the sons and the daughters of Ibadan in United States of America for rewarding returns home.

Between Expediency and Legality of Operation Amotekun|Oyesoji Aremu