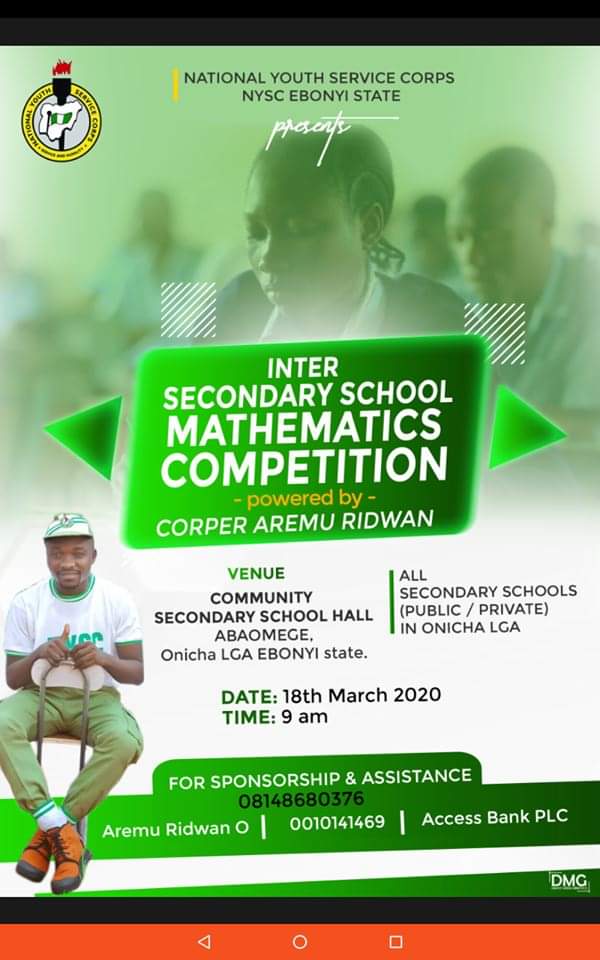 A graduate of Mathematics Department, the University of Ibadan who is also a serving corp member at Sagacity International School in Abaomege, Onicha Local GovernmentArea of Ebonyi State organized an inter secondary school mathematics competition.

Eight (8) schools from Onicha Local Government Area of Ebonyi State were duly represented in the competition which had Objectives and theory parts that lasted for 1hr: 15mins.

The first runner up was Ali Diamond, an SS3 student of Hephzibah Comprehensive College, Abaomege while the second runner up was Ekpe Benita, an SS3 Student of community secondary school, Abaomege.

In his remark, Corper Aremu Ridwan urged participants to shun mathematics Phobia as it affects their competence in the studying and understanding of the mathematics. He, however, said Mathematics Phobia is not born. He thanks NYSC for granting the competition as his Personal CDs and appreciated all serving corps members in Abaomege for their immense support before, during and after the competition

Also present at the events were principals of all invited schools and all serving corps members in Abaomege.

Deplorable Condition of Aperin boys’ High School Ibadan: Need For Its Alumni To Come To The Rescue