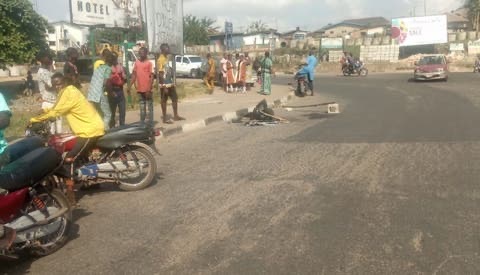 An unidentified man alleged to be an Okada thief was on Friday morning burnt to death at the Mile 110 roundabout end of the MKO Abiola Way, Ring-Road, Ibadan.

According to TribuneOnline, an eyewitness who was at the scene of the incident said the alleged motorcycle thief was chased from an unknown location where he was said to have stolen a motorcycle to the spot.

The eyewitness further disclosed that the said motorcycle was retrieved from him before he was eventually set ablaze by the mob at the scene.

Another eyewitness, who is also a resident of the area, said: “We have been at the mercy of the thieves in this area for quite some time now. Though I am not really comfortable with the jungle justice, but I think it serves him right.”