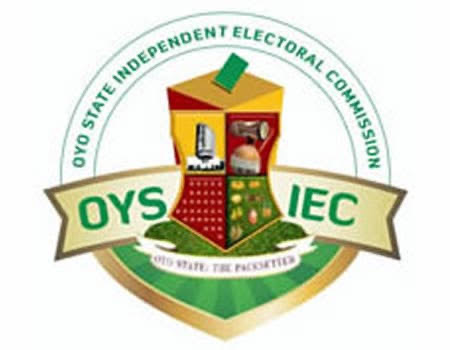 In a statement signed by the Chairman of the Commission, Aare Isiaka Abiodun Olagunju SAN, urged the stakeholders to give their total support and cooperation to the commission to ensure it organise and conduct free, fair, credible and transparent local government election in the State.

“In compliance with Section 30 Electoral Act 2010 (as amended), Section 5 (a) and Paragraph 1 (1) Schedule 2 of the State Independent Electoral Commission Law CAP 154, Laws of Oyo State of Nigeria 2000, the general public is hereby informed that Elections will be conducted in thirty-three (33) Local Government Councils in Oyo State on SATURDAY, 15th May, 2021 between 8:00a.m. and 3.00p.m.

“In the circumstance, prospective candidates are expected to obtain nomination forms in respect of the elections into their Local Government Councils at the Commission’s headquarters situate at Quarters 484, Total Garden –Gate Road, Agodi GRA, Ibadan. Oyo State on or before Monday 30th April 2021 upon payment of the sum of (A) N250,000:00k (Two Hundred and Fifty Thousand Naira) only for the position of Chairman or (B) N100,000:00k (One Hundred Thousand Naira Only) for the position of a Councilor.

The breakdown of the election time table is hereby shown below:-

International Youth Day: You Are Our Greatest Asset, Tegbe Tells Oyo Youths as He...