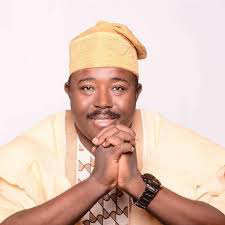 A Chieftain of the All Progressives Congress (APC) and former Secretary to the Oyo State Government, Chief Sharafadeen Alli on Wednesday submitted nomination form for Oyo South Senatorial contest of the party in Abuja.

Sources at the APC National Headquarters said, “Alli, a known political son of former Governor Rashidi Ladoja of Oyo State was sighted on Tuesday and Wednesday at the party’s Secretariat here in Abuja.

“I can confirm to you that Sharafadeen Alli picked the nomination form on Tuesday morning, hours before the initial deadline set by the party.

“He submitted the form here on Wednesday afternoon,” a source told reporters.

Another source said the APC leadership was happy with the latest development because of Alli’s revered antecedent as an achytypal politician of note.

“Remember that the party leadership has been making overtures to Senator Rashidi Ladoja to support the APC in Oyo State and Nigeria as a whole.

“Alli’s entry into the race may not be unconnected with Ladoja’s readiness to present one of his most trusted ‘political sons’ for the position.

”As a party, we are happy that this aspirant is a man of unblemished character in all his private and public service. As a trained lawyer and Senior Chief in Ibadanland, the APC is happy with his aspiration which is a positive signal ahead of 2023.

”We are making serious incursions into the State and complementing our stronghold on the Southwest politics of Nigeria as a ruling party.

“We are aware that Ladoja himself is a former Senator from the Oyo South. The senior politician and elderstatesman is an household name in Nigerian politics having paid his dues in the political firmament of this country.

“And with Alli’s entry into the race, it then means that Ladoja who birthed the current government of the Peoples Democratic Party under Governor Seyi Makinde has approved such development and would potentially support the APC in winning all electoral contests in 2023,” another source remarked.

Efforts to get Alli’s confirmation of this development have been unsuccessful, while calls to Ladoja’s erstwhile spokesman and now a serving Council Manager of the Akinyele West LCDA, Alhaji Lanre Latinwo were not responded to, as of the time of filing this report.

But a close associate of Alli, Barrister Koyejo Oyetunde confirmed that the politician has truly picked and submitted the form.

According to him, “it is true that he has picked and submitted Oyo South APC nomination form. As I speak with you, he is still in Abuja, waiting to be screened before returning home. We have absolute confidence in God and our party leaders and supporters that Alli will pick the party’s ticket and win the race for the party.

“Remember, he contested for the same seat in 1998 and won but the era was truncated by military interference. He is the best man for the job and will deliver because of his experience, exposure and pedigree,” Oyetunde added.

Aderonke Dairo: The Woman Who is Rising by Lifting Others