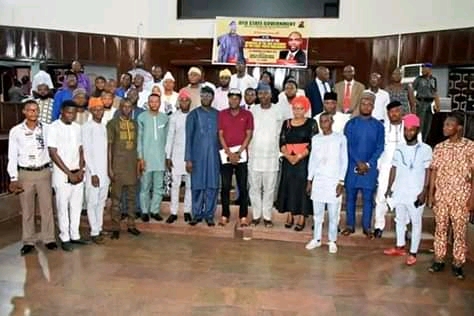 Muteness has been my mode ever since I got appointment of Oyo State Youth Parliament, I made up my mind to pursue other interests that will add value in other areas so as to live a life that is dedicated to increased wellbeing of humanity, thereby taking a deep breath from politics and its shenanigan.

However Engr. Seun Fakorede stepped on mamba’s tail by this path of impunity he is towing. I am stepping out to comment because in fairness and conscientious thinking, I could not live with anything that is not right, and not capable of pursuading me nor convincing about it.

Giving a good consideration not as a dissolved parlaimentarian rather a Comrade who put interest of his state at heart, a good government after being sworn in should be father to all. Is Youths of the parliament not Oyo indigene? When there is change in government, the new Government will inherit both Assets and Liabilities; more importantly, when this second assembly is an asset to the state.

I cannot imagine someone who got appointed on the platter of gold condemning a process that brought in members of the State Youth Parliament. I can still remember vividly circumstances that surrounded his nomination as a commissioner. We were all happy that a comrade is nominated and subsequently appointed to man the Ministry of Youth and Sports, this was with hope that only a fellow whistle-blower will understand what flute is speaking.

There were petitions as well as protest that rocked the whole process, comrades from all walks of state stood up irrespective of political affiliation waged war against this party loyalist who are against his nomination. However they mobilized a Pro-Phakoo procession to counter the aggrieved PDP members in the interest of Oyo Youths and putting Oyo First as we thought he would be a round peg in round hole.

Ability to manage all regardless of their party, religion, ethnic, party and what have you remains a quality of a good leader. Leader must be accommodating, embrace the differences and understand that there is virtue in individual.

Unfortunately, many are too petty and immature to manage people and position. It is true that Absolute power corrupts absolutely.

All they want is people in their party who will forever chant their praise which is a smooth ride to destruction. They have forgotten the words of Gorge Santayana which says “those who fails to read history are bound to suffer the repetition of its mistake”.

Engr. Fakorede has forgotten that he is the commissioner for youth and sports of Oyo state not of PDP. He fiddled with their lion’s tail subsequently when he says Oyo State Head of Service supervised illegal nomination of members of youth parliament, a programme which money was earmarked for.

It will be more appreciable if Engr. Seun Fakorede can graduate from archaic political act and adopt twenty-first century ideology of government appointee who is saddled with the responsibility of serving his father land and not some set of political bandwagons.

“I Did Not Live An Extravagant Life” – Dapo Lam Debunks Rumors, Lies Flying...