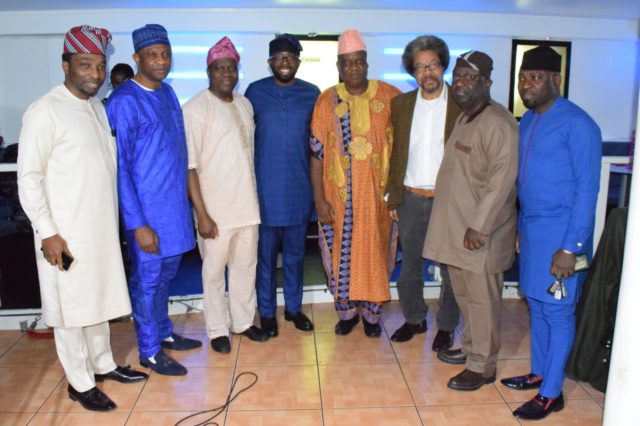 The United Kingdom (UK) Chapter of the Oyo State All Progressive Congress (APC) held her New Year Party dinner for members with invitees from within Oyo State other South West States where United Kingdom National Executives were present to grace the event.

Hon. Seyi Adisa in his speech adviced Apc members in diaspora to frequently visit Nigeria in their various constituency to initiate community development project through their wealth and the pool of knowledge they have acquired in abroad.

He further sighted example of himself, having served as private secretary to the former governor Abiola Ajimobi for good 8 years, he had learnt a lot from him. He now deemed it expedient and necessity to domesticate all what he has learnt in his constituency by giving initiating some lofty projects in different areas of life e.g. education, electricity and other humanitarian assistance to people even before he contested.

Hon. Adisa also said he got to know that the simple and straight forward language everyone understand in Nigeria is growth and development of your community. This gave him edge above other aspirants during the context both in primary and general election of 2019. He thereby admonished diaspora to emulate such strategies.

The Chairman South West APC UK, Muyiwa Adesuwa while reacting to what Hon Adisa’s speech said that the diaspora have capable hands who can represent their people in elective positions rather than handpicking one or two people to be Special Advisers.

“We have loyal members who are committed and consistent, pushing for the course of this part and non of them have decamped to any political party.

“For us in South West, we are coming home to engage our party chairmen and whosoever is the SA diaspora because it is time to interface and interact with our leaders back home.

“We want to let you know that we have capable hands among us who can represent the people because times without number, you just invite one or two people to come and be Special Advisers (SA). We need to be given also an elective positions and also be given opportunity to get involved in the party politics”

Also addressing the gathering at the event, the National Chairman, APC UK Dr Edeawor said that APC UK is working hard to ensure they are a congress this year and participation will be strictly for registered members who are financially committed.

“As a party, we have made tremendous sacrifices and we can’t allow our party to die for any reason.

The Chairman, UK APC Oyo State Mr Kolawole Saidu appreciate the Law Maker along side other invited guests for creating time to attend the event saying their presence is perfectly timed.

“I will also like to start by addressing first Hon. Seyi Adisa by saying that you could not have come at a better time. Oyo State has a sizable number of indigenes in the UK. The financial support they provide for people at home gives them enormous influence which should inform our strategic thinking as a party and politicians.

“Regrettably, past Oyo State Assembly has not made any conscious effort to see how they could engage with Oyo State people in the diaspora to take advantage harvest these vast resources in terms of human, financial resources and voting power.

“No past government in Oyo State has made conscious effort to create an avenue to register professionals from Oyo State resident in the UK who could contribute meaningfully to policy formation, education, health and social engineering of the state and Nigeria in general.

“Later in the year, we will organise or facilitate with your good office a worship of all stake holders which will include religious, town and city group leaders in the UK who are from Oyo State.

“This is with a view to creating an avenue for cross fertilisation of ideas and to discuss what is germane to them as far as development and vision for Oyo State are concerned.” Kolawole said.

Members of the State executives that were present are the Public Relations Officer, Hon. Abiodun Owolabi, the Secretary Hon. Supo Philips among others.

The event was coordinated by B&S Promotion and event planner while the entertainment and music was supplied by Israel Ekundayo.

JUST IN: Three Killed, One Kidnapped in Oyo – Police