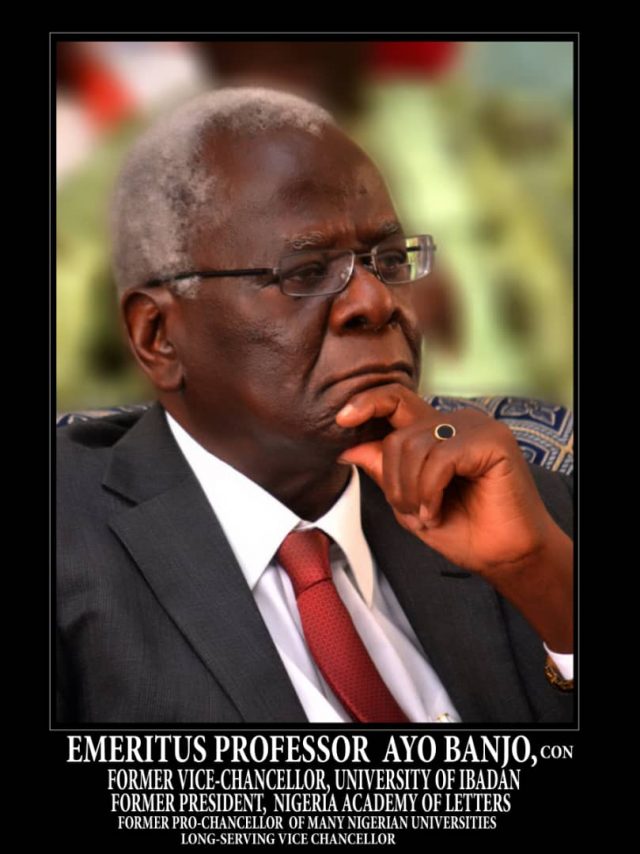 Professor Ladipo Ayodeji Banjo clocks 88 today, May 2, 2022. In the past 56 years, we at the University of Ibadan have had the singular honour and privilege of being served, led and mentored by the rare combination of erudition, rectitude and humility personified by Prof Ayo Banjo.

Webometric rankings and other forms of assessment continue to declare the University of Ibadan to be the first and the best in Nigeria. While being the first is a historical fact, being the best can only be the result of human, administrative and academic hard work. It is impossible to scan our past, even in the most rapid and casual manner, without spotting the outstanding colossus known as Ayo Banjo.

Beyond the University of Ibadan, he served the nation in many capacities. It is a sad irony that Professor Ayo Banjo clocks 88 when all Nigeria public universities are shut down as a result of a strike action by the Academic Staff Union of Universities (ASUU). It is sad because Prof Banjo laboured to put an end to strikes in Nigeria universities when he volunteered to lead an ASUU-government negotiation team in 2000. The agreement arrived at was considered to be the most comprehensive agreement so far. If fully implemented, it would have largely reduced, and possibly eliminated strikes and their accompanying regrettable wastages in the Nigerian university system.

It is absolutely impossible to contain the extent of Prof Banjo’s service to the University of Ibadan in this mini tribute. He was Justice of the Peace (JP), Oyo State (1984); President, Nigeria Academy of Letters (2000-2004); Fellow Nigeria Academy of Letters (2000); Commander of the Order of Niger, CON (2001); D Litt. Honoris Causa, Port Harcourt (2005); Pro-Chancellor, University of Port Harcourt (2000-2004); Pro-Chancellor, Ajayi Crowther University (2005-2014); Fellow of the Nigeria English Studies Association (2006); Nigeria National Order of Merit, NNOM (2009). And this is not even halfway through the list.

That line of the Nigeria National Anthem which runs “the labour of our heroes past, shall never be in vain” calls us to honour our past heroes. But we must also honour our heroes who are still present with us, such as Prof Ayo Banjo.

How do we honour a colossus like Prof Ayo Banjo? In 2014, the University of Ibadan honoured him with the highest honour in the University system: the Doctor of Letters (Honoris Causa); in 2019 the Vice Chancellor’s Lodge was appropriately named Ayo Banjo Manor. Yet all these are inadequate for a man who gave his all to the system for nearly six decades. There still remains much honour to be given to Prof Ayo Banjo. Perhaps the best and the most lasting honour for a hero is the preservation of the ideas and ideals for which they laboured. For Prof Ayo Banjo, those ideals are to be found in the rise of the Nigeria university system to global competitiveness. At the University of Ibadan, we continue to do our best to ensure this.