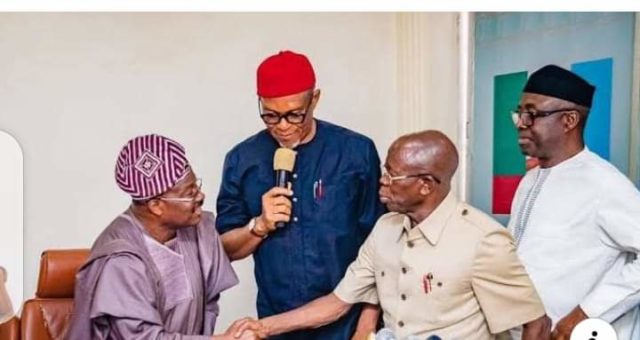 An aspirant for the vacant position of the Deputy National Chairman (South) of the All Progressives Congress (APC), Hon. Michael Akinleye, has sued the National Chairman of the party, Comrade Adam Oshiomhole, over alleged plot to impose former Oyo State governor, Senator Abiola Ajimobi on the party.

The plaintiffs, in an originating summon dated October 30, 2018, filed before a Federal High Court in Ado-Ekiti, through his counsel, Taiwo Omidoyin and Tunde Oke, said his right had been violated and grossly infringed upon by the action taken by the Oshiomhole-led National Working Committee.

Akinleye, who is the chairman of APC in Ado-Ekiti Local Government Area of Ekiti State, noted that he expressed his interest to vie for the position in a letter dated January 20, 2020, which he forwarded to Ekiti APC to nominate him for the position, and this he attached as exhibit.
Apart from Ajimobi and Akinleye, Senator Gbenga Aluko, is also contesting for the vacant and was the preferred candidate from Ekiti APC caucus.

The seat became vacant since 2019 following the nomination, clearance and swearing-in of as the Minister of Industry, Trade and Investment, Chief Adeniyi Adebayo.

The plaintiff asked the court to restraint the party from nominating Ajimobi or anybody to the vacant position without following the due process and dictate of the APC constitution.

He also urged the court to determine whether Ajimobi’s imposition was not a violation of Articles 17 and 20 of the party, which stipulated that such position can only be filled by a consensus among aspirants or by elections during congress and convention.

The prayer of the claimant include, “an order compelling the party “to follow its constitution, customs and practices by filling the vacant position with a duly nominated candidate from Ekiti State to complete the unexpired tenure of four years mandate given to the state through the former occupier of the office, Otunba Adeniyi Adebayo, who is currently the Minister for Trade, Industry and Investment and not from Oyo State or any other states in Nigeria”.

“An order restraining the South-West APC Caucus from forwarding the name of Senator Abiola Ajimobi or any other name to the national chairman, National Working Committee, to fill the vacant office, having not followed the due process as enshrined in Articles 17 and 20 of APC Constitution, pending the determination of the substantive suit.

“An order of the court restraining the national chairman, National Working Committee and APC from accepting any nomination to the office of the deputy national chairman, pending the hearing and determination of the substantive suit in the case”.

Akinleye also asked the court to compel the national chairman and National Working Committee to reject and disregard any name sent by the APC South-West national vice chairman, the APC South-West Caucus, to fill the position of the deputy national chairman, in the event that any name has already been sent pending the hearing and the determination of the substantive suit in the case.

He further urged the court to determine “whether the purported nomination of Senator Abiola Ajimobi as the deputy national chairman by the party organs and personalities was done in accordance with Article 20 of APC Constitution, 2014, as amended.