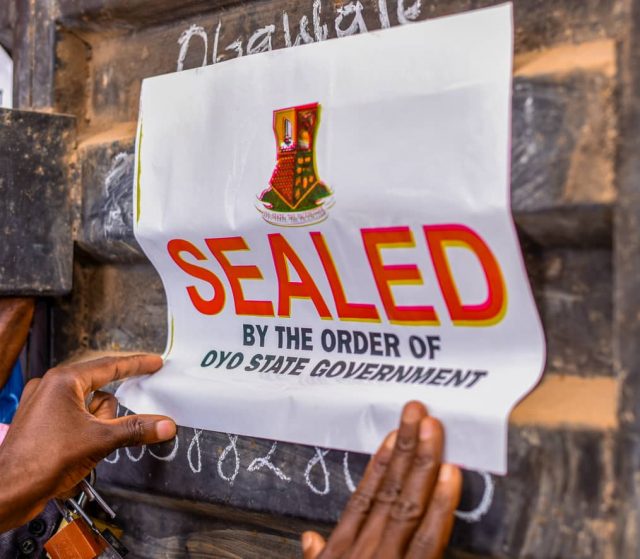 The Oyo State Government through the State Gaming Board has shut down six gaming centers in Ibadan, the State capital for violating the rule of allowing underage betting especially students in uniform during the school period.

In a statement made by the Director-General, Oyo State Gaming Board, Mr. Olajire Boladuro while addressing women said that most centers have been served with letters of warning for them to desist from allowing underage to participate in gaming or allow them in their premises.

OYOMIND.COM.NG recalls that the Oyo State Government had earlier declared that it was illegal for children under eighteen years to participate in gaming and any gaming Center found guilty of ala lowing such or operates with proper registration would be sealed by the State Gaming Board.

According to the Director-General, the n enforcement exercise was embarked upon by the Board on the need for the Gaming center to cooperate with Government on gaming law and you ensure proper registration and remittance of levies and dues to the state coffers.

He explained further that the Board was also out to seal illegal gaming center operators and to Director-General levies and dues by defaulters.

Mr. Boladuro said ‘’Most of the operators are aware that the state government under the leadership of His Excellency, Engr. Seyi makinde frowned at underage gaming but most of them despite having being warned severally with letters and through media sensitizations still persisted.

“Some of these children even go to the centers with their school uniforms when they should be in school learning while some have turned those places to a hideout instead of going to school or be at home to help their parents.

‘’Also, we have many illegal Gaming center operators that are yet to register with the Board and thereby operating without license, there are some that refused to pay up their levies and dues despite several letters of reminder served on them.

‘’For government to fulfill all its financial obligations, all gaming centers as business owners need to remit their levies and to the rightful place as their civic duties, therefore, we implored the concerned gaming centers to cooperate with the government by fulfilling their statutory obligation as at when due.”

The Director General used the opportunity to appreciate those that have complied and encouraged them not to relent in continuing to support the State government to achieve a desirable society and an economically viable environment.

ALGON: Opening the Eyes of Oyo PDP Members to Facts from S’Court Verdict ||...

Human Rights Abuse and Violations in Africa: The Nigeria’s Case || Abdullateef B. Isa