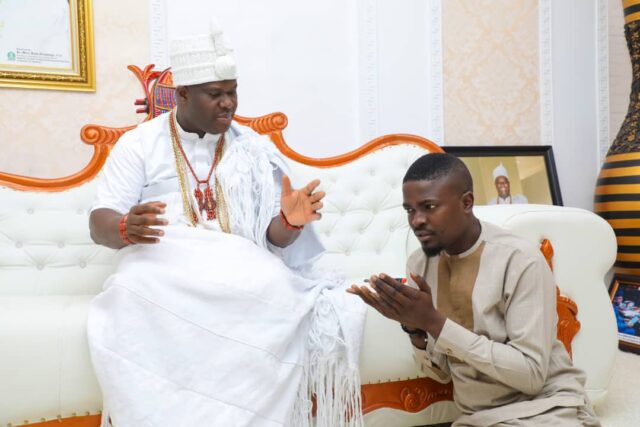 A viral open letter written by a young agribusiness entrepreneur Ola-Abraham Oluwafemi to the Ooni Of Ife has received royal attention, as the Imperial Majesty Oba Adeyeye Enitan Ogunwusi, Ojaja II met the author and offered to support his inspiring agribusiness ideas.

The author of the letter, Ola-Abraham Oluwafemi has written the traditional ruler of the Yoruba kingdom of Ile-Ife asking how can a man From humble background build wealth with hard work and diligence, amidst various uncertainties surrounding the countries business environment and dangling economy.

In his viral letter to Ooni of Ife, Oluwafemi suggested that it is unfair to blame poverty on personal failure and attributes wealth to personal virtue because everyone that became successful had a leverage.

According to him, most successful persons with record-breaking achievements in their fields had tall shoulders they leaned on, which he considered as advantages many young diligent and hardworking Nigerians do not have.

Addressing the writer and his team during the meeting, Oba Ogunwusi faulted the popular societal assumption which considered wealth and accumulated riches as the only determinants of success.

According to him, for the society to experience peace and healthy competition, fulfillment should be considered as the benchmark for measuring success, instead of wealth and riches.

He said, “I applaud your courage to write to me and express your thought to the world. In a true capitalist environment, your conclusion is very valid but we need to be fair and appreciate the impact of every individual contributing to the existence of the world as an ecosystem.

“People have different ambitions and you’re successful not only when you make a lot of money, but when you attain your ambition and feel the fulfillment of your aspirations.

“For instance, my late mother had six children. She never bought a car neither did she build a house, but she always derives her fulfillment from the growth and successes of her children. Today, I’m one of the houses She built, will you say my mother was not successful?

“Our youth should be patient and be consistent in their pursuit for greatness. I am impressed with the writer’s ideas and agribusiness concept he currently runs. We will keep in touch and look into have we can support him and other youthful ideas for a prosperous nation.”

The author of the open letter- a 31year old Ibadan born agribusiness entrepreneur and Chief Executive Office of Owanbe Farms and Foods has described the Ooni of Ife as a mentor support for African youths since he enthronement.
According to him, for over five years, Owanbe Farms has being consistent in the use of Other Peoples Money, (OPM) Method to fund its flourishing farms and food businesses. Presently, owanbe farms has cultivated over 16,000acres farms across three Southwest States (Oyo, Ogun, and Osun), with food outlets in Lagos, and online delivery to homes and offices.

He said, “If we start from Nigeria, Asiwaju Bola Ahmed Tinubu had his mother, a foremost trader and Iyaloja of Lagos. Dangote had his uncle who could borrow him a loan. Femi Otedola had a father who was a Lagos Governor.
“I do not mean to say these men are not geniuses in their own field, they are great men. They have their own intelligence and are very hardworking and creative. But they have the advantage children like us probably will never have.

“Mark Zuckerberg was sent to Phillip Exeter Academy with tuition almost $57,000 for boarding and he got himself a private software developer David Newman to give him private tutoring in computer science.

“I have done fairly well for myself but like a great man once said being an average is risky. Because you are as close to the bottom as you are as close to the top. I want to help more people I want to create more jobs. Not because I desire fancy holidays, an exotic car, or designer wear but because I understand and have experienced a first-hand relationship with poverty and I wish to take more Nigerians out of that quagmire.

“I have followed the Ooni of Ife since he became the king, I appreciate his support and believe in the Nigerian youth. This informed my decision to write him an open letter and I am impressed with the invitation, the encouragement, and prayers.”

Fatai Aborode Was Murdered By Yoruba Not Fulani Herdsmen – Makinde