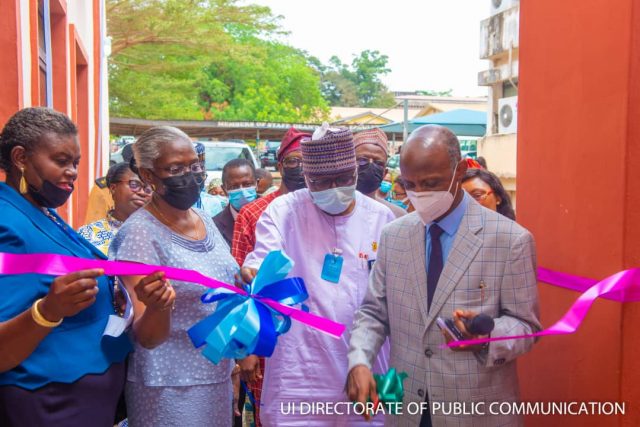 The Executive Secretary of Tertiary Education Trust Fund (TETFund) Prof Suleiman Elias Bogoro FAS, has declared that the 21st-century economy is knowledge-driven as obtained in developed countries of the world and the pillar that upholds this knowledge economy is research.

Bogoro said this at the commissioning of five (5) TETFund projects at the University of Ibadan where he called for private intervention to grow endowment funds for research.

Prof Bogoro spoke at the official opening of the Administrative Building of the Pan African University, Life and Earth Sciences Institute, University of Ibadan on Friday, 04 March, 2022.

He recollected that in 2019, when he was reinstated as the Executive Secretary of TETFund, he made a case for TETFund to deepen research in ivory towers, polytechnics and colleges of Education.

He noted that historically and traditionally, the universities are the leaders and centres of research.

He therefore called on all stakeholders in the research hubs to lead in manners that the research findings in various fields and disciplines will be channeled in ways to change the fortunes of Nigeria.

The Executive Secretary expressed his appreciation to the African Union for the concept of establishing the Pan African University with campuses spread across Africa in specific areas of priority. He lauded the University of Ibadan for providing exceptional leadership in the areas of priority given to PAULESI which are health and agriculture.

Prof Bogoro paid glowing tributes to the Chairman, UI-Research Foundation Board, The Rt. Hon. Chevalier Uduimo J. Itsueli, OON, KSJ, D.Sc for his outstanding contributions to research through his personal donations running into hundreds of millions of naira pointing out that the strength of the success of the developed countries of the world rested on contributions through endowments or establishment of research foundations that have been providing funding platforms for those universities to grow.

He said this was why some renowned and leading universities of this world are having endowment funds that are larger than the budget of Nigeria.

He then called on successful Nigerian entrepreneurs to come out and rightfully endow their wealth to fund researches.

Earlier in his speech, the Vice-Chancellor, University of Ibadan, Prof. Kayode Adebowale FAS, mni, had expressed his heartfelt appreciation to the Executive Secretary of TETFund, Prof Suleiman Elias Bogoro for his exceptional love for the University of Ibadan.

Prof Adebowale recalled the many challenges that PAULESI went through in terms of accommodation since inception and said the official opening of the Administrative building was reason enough for celebration.

In remarks made on behalf of the Commissioner, the Acting Director, Education, Science, Technology & Innovation, African Union Commission, Mr. Hambani Masheleni recounted the pivotal role played by education in the socio-economic development of African countries.

This, he said, led to the creation of a department in charge of Education, Science, Technology and Innovation by the constitutive act of the African Union Commission. This was to enable the continent to collectively formulate and design policies and programmes for responsive and transformative education systems in the continent.

He therefore, on behalf of the African Union Commission thanked the government of the Federal Republic of Nigeria through the Executive Secretary of TETFund, the Vice-Chancellor, University of Ibadan and the Director, PAULESI, UI for keeping the flag of PAULESI flying in the University of Ibadan.

The Director of PAULESI, Prof. Esther Akinlabi expressed profound appreciation to all that made the dream of the 250 million naira project come true.

All projects were commissioned by the Executive Secretary of TETFund, Prof Elias Bogoro.