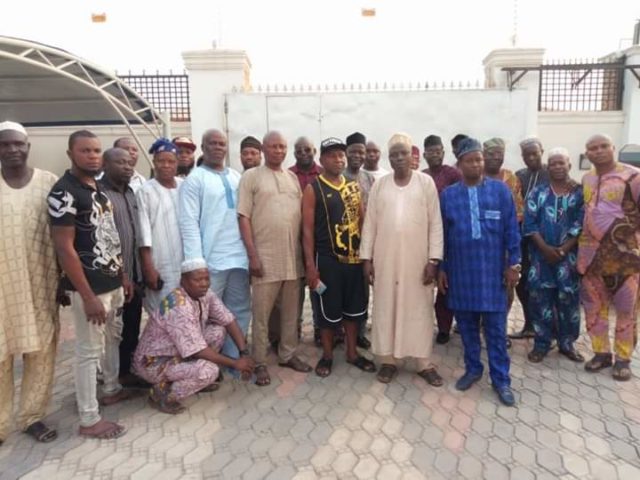 The Oyo State command has reacted to the inciting trending video on social media to at to peace and security in Oyo State which featured the erstwhile Chairman, Alh. Abideen Olajide a.k.a “Ejiogbe” and some other members of the proscribed NURTW in Oyo State.

As contained in a press release made available to oyomind.com.ng and signed by the Police Public Relations Officer, SP. Fadeyi Olugbenga, the commissioner of police warned all the warring factions of the proscribed union to maintain peace and sheath their worth and a from any action that is capable of threatening the peace and security being enjoyed by the peace-loving good people of Oyo State.

“The attention of the Commissioner of Police, CP Shina T. Olukolu psc(+) has been drawn to an inciting trending video on social media on the threat to peace and security in Oyo State which featured the erstwhile chairman, Alh. Abideen Olajide a.k.an “Ejiogbe” and some other members of the proscribed NURTW in Oyo State.

“The Commissioner of Police wishes to unequivocally and sternly warn all the warring factions of the proscribed union to maintain peace and sheath their swords and abstain from any action that is capable of threatening the peace and security being enjoyed by the peace-loving good people of Oyo State.

“The Police, as the lead agency in internal security, in synergy with all other sister security agencies will continue to carry out its constitutional responsibilities of the protection of lives and properties amongst others and will therefore not fold its arms and allow any disgruntled individuals or groups to take the laws into their hands and cause chaos or mayhem.

“The appointment of the pack managers should therefore not be misrepresented. It is simply a call to service and does not call for any form of celebrations or funfair neither should it be an excuse for an orchestrated agenda to foment lawlessness and disunity.

“The Commissioner of Police, therefore, wishes to admonish all the Stakeholders, leaders and the entire peace-loving good citizens of Oyo State to complement the efforts of the security agencies in the maintenance of law and order by prevailing on the proscribed members of the NURTW in Oyo State to desist from stoking/fanning the embers of chaos, lawlessness, and disorder, that has the capacity to take the state back to the ancient destructive days of “Wetie”.

“As the Police assisted by others strive to continue to provide adequate security both within and outside Ibadan metropolis, all aggrieved parties, are seriously warned to refrain from any act(s) or cause of action that may lead to the breakdown of laws and order, lawlessness, shedding of innocent blood, injuries or damages to properties.

“The good citizens of Oyo State are however assured of their safety and advised to go about their lawful businesses in an atmosphere of peace and tranquility devoid of any molestation or threat whatsoever.” He said.

JUST IN: Another Woman Macheted to Death in Akinyele

OYHA At War as Speaker Removes Akinajo As Chairman House Committee On Works and...