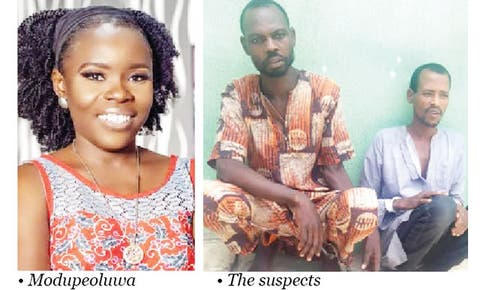 Two persons, Abubakar Mohammed and Ayankunle Ayaleye, have been arrested by the Oyo State Police Command for allegedly kidnapping a businesswoman, Modupeoluwa Oyetoso, and shooting dead her fiancé, Opeoluwa Oladipo, in the Ibarapa East Local Government Area of the state.

Fadeyi said a Tecno phone and a single-barrelled gun used for the operation were recovered from the suspects, adding that N22,500, which was part of the ransom paid to secure Modupeoluwa’s release from captivity, was also recovered from them.

He stated that efforts were being made to arrest two other fleeing members of the kidnap syndicate.

The PPRO said, “Information reaching me on the kidnapping case at Odo-Edu Igbodudu Road, Lanlate, Ibarapa East Local Government Area of Oyo State, where one Modupeoluwa Oyetoso reported that her fiancé, Opeoluwa Oladipo, was shot in a Toyota Highlander SUV and she was kidnapped, has revealed that two suspects, Abubakar Mohammed, 30, and Ayankunle Ayaleye, 37, have been arrested in connection with the case.

“The sum of N22,500, which was part of the ransom collected, was recovered in addition to one Tecno phone and a single-barrelled gun used for the operation. Efforts have been intensified to arrest two other fleeing members of the criminal gang.”

When asked if Modupeoluwa had been contacted to identify the suspects, Fadeyi said, “The officer-in-charge of the Anti-Kidnap Unit of the command said she was there on the day they were interviewing the suspects and she identified them.”

Our correspondent had reported that the lovers were returning from the farm when four men waylaid them around 5pm.

While Oladipo was attempting to manoeuvre his way to escape, one of the gunmen shot him.

The assailants reportedly caught up with the businesswoman, whisked her away into a nearby forest and left her fiancé for dead.

Sunday Igboho: I Have What It Takes To Fight Boko Haram