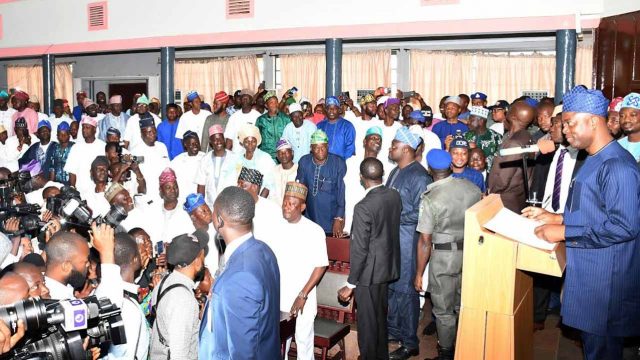 The Caretaker Chairmen of 33 Local Government Areas and 35 local council development areas, whose six months tenure extension for the caretaker chairmen is billed to expire on December 19, are set to extend their stay in office by three months.
This was contained in a letter from Governor Seyi Makinde seeking the tenure extension for the caretaker chairmen read at plenary of the state House of Assembly on Monday.

Speaker of the state Assembly, Honourable Adebo Ogundoyin, who read the governor’s letter, has however, assured that the request will be attended to during its plenary on Friday. He however noted that the Assembly will also consider the report of its Committee on Local Government and Chieftaincy Matters in considering the governor’s request.

Another letter from Governor Makinde which contained the names of nominees for the Board of the Oyo State Anti-corruption Agency was also read at the day’s plenary. The nominees are Hon justice Eni Esan, a rtd President of Oyo State Customary Court as Chairman; while Prince Oyebade Oyedepo; Mr Temitope Ayorinde; Mrs Esther Olapade; Mr A.S Ashaolu; Erindero Lawrence; and Mr Ibrahim Oyemonla Tijani as members.

The nominees are to appear before the Assembly on Friday for screening.

Meanwhile, the Assembly also approved Mr Lawal Ayansiju who, upon appearance at plenary was asked to bow and go, as Commissioner-designate for the state.

Teni, Ninalowo, KieKie, Others To Perform At Fanfaro Autofest In Ibadan