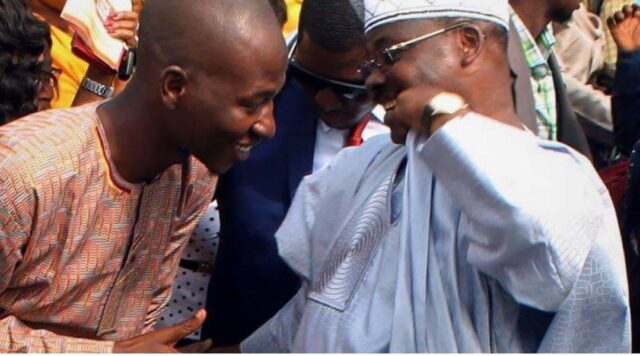 It was in 2016 that I had my first close encounter with him. Before, we only met at events. I cannot remember the date, it was 3rd Ramadan. We had been invited to come break fast with him and discuss other issues. Somebody had told him about us – Kola Adebiyi, Samsudeen Mobolaji Popoola, Apesin Ayodele Idowu, Sayo Aluko, ‘Debayo ‘Debayo George, Adedamola Adedotun Layade and yours sincerely.

It was few minutes before 1 a.m. He had hectic time attending to visitors. He had attended to former governor Olagunsoye Oyinlola, Alhaji Lateef Akinsola (Tokyo) and Oloye Adelabu Adebayo Adekola He later asked his aides to move us from the tent in the basketball pitch to one of the rooms in the Government House. He came with Seyi Adisa, Tolani Alli, Niyi Ajao and Dayo Iyaniwura.

“Have you been served?” we chorused yes. “Do you want tea? Ki e mo l’Ajimobi lahun…” We all laughed. His eyeballs were like that of someone who just woke up. Our own eyes were ‘opening closing’. The AC almost killed us. It was obvious we wanted sleep.

“I am sorry for keeping you waiting. Ise ilu ni…” He said after we had introduced ourselves. After we had finished talking, that was around 2 am, he asked us what people were saying about him and what we felt he was not doing (I was sitting close to him). I told him about our abandoned Atiba FM radio station, the less than 7km road projects. “Believe you me,” he adjusted his frame, “that road, I decided to assist our local contractors but they are messing things… The radio station, we have acquired the equipment, we only need to get that place fixed first. It will be completed soon.” I was so happy. I was eager to end the meeting, to break the news.

We left Government House fulfilled that early morning, around 2 am. We lodged in a nearby hotel, behind Mr. Biggs, Bodija.

He was human, like all of us. We expected perfection, equality but no human can give it except God. There were issues about the way the activities of the party were carried out. Anybody could have done what the Lamists’ faction did. I am sympathetic towards anything Lam-Adesina. It was all politics. I popularized Elele, a nickname many of his close associates called him behind his back. Remember the track Kwam did for Elele. ‘Elele kiise eni arifin…’ Ajimobi was quick to tell anybody that he was older.

The 2019 election went as it was ordained by God and I know all the warring factions regretted their actions.

But one thing: Ajimobi changed the face of governance in Oyo State. Lam-Adesina set the tone. The interregnum between 2003 and 2011 drew us back. He assembled a wonderful team. Who can you compare with Adeolu Akande, Yunus Akintunde, Akin Olajide, Adebayo Mutalubi Ojo, Muyiwa Gbadegesin, Dapolam, Oladele Olatubosun Zacch Adelabu, Abim Adekanmbi, Fatai Ibikunle, Fatai Buhari, Festus Adedayo and others? All of them fit perfectly where they were assigned.

Before Ajimobi, Iwo Road was a no-go area. He brought peace. Many people who were ashamed to identify with the state started embracing it.

Surely, Ajimobi had his flaws, like me and you. He was blunt. He could talk, with appropriate words. To me, talking was his weakness. But it was also his strength. If you had any grievance against Ajimobi and you get to see him, that was all. He can use his mouth to ‘toast’ you.

I can only pray Allah repose his soul and give he family the fortitude to bear the loss.