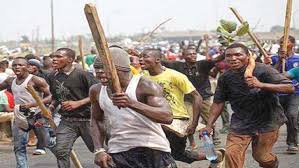 I woke again this morning feeling more languish and ravenous than I was before I went to bed last night. Apparently, It was the second consecutive time that we didn’t eat before drifting to bed. Our eatables were gradually getting exhausted, hence, we skipped our proposed undernourished meal for the next morning, leaving for bed without a pinch of tidbit. You can imagine the terrible experience we are yet passing through, as my father who’s the breadwinner could no longer go to work, the mother is away on the land of no return, and we the children couldn’t add anything tangible to the table, considering that all business activities has been shutdown. Consequently, it’s a situation of no joy as I also observed that even our next-door neighbor also slouched impulsively in this same shoe of hunger and anger that was born out of the lockdown declaration by the federal government in the measure to contain the Coronavirus

It’s evident that Nigeria enfolds the population of about 200 million people, of which half of her people are susceptible to extreme hunger, most especially and blistering in a pandemic period like this where every place appears to be shut off from all human and nonhuman activities. Perhaps, one does not necessarily need a flattering NCDC report or a presidential task force press release to tell us that how people are hindered and unable to go out, fending for a means of survival. It’s dismaying that Covid-19 lockdown blooms and protracts every day in our community without a substantial palliative measure to diminish the hardship of millions of Nigerians living from hand-to-mouth, or who could hardly spend a dollar per day.

True, as imperative as this lockdown process could project, it’s however peremptory that government should ascertain that locking down people down at home in a destitute country like this, is like asking people to go famished for the duration of the lockdown. Consecutive congenial has studies has shown over the years that more than 50 percent of Nigerians survive on daily pay from menial jobs, small scale businesses, buying and selling, petty trading e.t.c. This closure only decrypts that their means of daily livelihood has been shutoff. Hence, one needs to ask the question of what will be the fate of a 54-year-old breadwinner man who sells planks at a lockdown Bodija market, and yet, will still have to cater to his family of five. Again, of what will be the fate of a secondary school teacher, employed by his private employer, and yet he will not receive a fine of salary during this lockdown. It’s seeming that some employers had forced their employees to an unfair pay cut of irrelevant values. Some had even outrightly relieve their workers of their employment.

In the plight of this situation, the pains and twinges of hunger of people are gradually breeding the ugly effects that we cannot overlook. These hungry people can no longer fend or contain themselves anymore inside their houses. They are getting suckered by the hunger caused by the lockdown, it summarises that we can relatively see the ‘rebellious’ ones out on the street, looking for what to devour, before they are finally devoured by famishment. Just Imagine, how do the Nigerian government expect her citizen to survive against a lockdown without palliatives? These resources that are not even enough to feed a family of five in 2 one week, yet the government finds euphoria in distributing these sort of intangible tidbits, considering it can never be enough to pull through. It’s, however, infuriating that lack of food to survive in our community had procreated into a crime infiltrated community. The crime rate at which people are indulging in these days is overwhelming. Markets women selling foods are harassed, tenants are harassed, landlords are harassed. Our ears are filled with various reports of angry and hungry youths invading parts of the community, knocking at doors, demanding money for food. This state of affairs has made life unnecessarily daunting and insecure. According to reports from an eye witness last week, suspected and unidentified hoodlums, invaded some communities in the Ibadan North local government of Oyo state, areas such as Barika, Sango, and environs, breaking into shops and houses carting away people’s valuables. The situation has caused the residents of these areas to live in fear of the unknown.

Moreover, in the light of this theme, it’s evident that the ‘stay at home’ order is inevitable in order to curtail the spread of this fast infecting virus. It’s only bad identifying that inasmuch as the government is affected by this lockdown, so are the people they govern upon. It’s thereby a question of whether there are any other relative means of clogging the wildfire of this virus? And should it be only by locking down of activities, it’s the question of if the government will continue watching her vulnerable people die of hunger while shutting off at home? Or shall the government watch her community be regularly invaded by this ‘rebellious and ad-hoc’ hoodlums? And maybe the question of if the government will still continue with her meager distribution of palliatives? Or won’t the thought of hunger won’t kill people faster than the virus itself.

Therein, as there is a need for the people to exercise some restraint at this time of health challenges caused by a coronavirus, so is the need for the government to hasten her steps in ensuring the safety of her citizens. The Federal and state governments should urgently put in place social protection measures to uphold the right to food. Distribution of palliatives should not be scanty, and not be a matter of prejudice. The measures to address food insecurity could include food subsidies for those living in poverty, and directly providing food to those who are unable to provide for themselves. Without support from the government, the lockdown would become a matter of life and death for those living in poverty. The government needs to also provide adequate security to the people while enforcing the restrictions and movement of the people. In the same light, the government should also tame the activities of the forces while they are enforcing the lockdown. The admixture of the Nigerian police force and the soldiers have been deployed to the streets to monitor the movement of people and ensure they comply with lockdown measures implemented by governments. However, security personnel is using disproportionate force in dealing with members of the public, including beatings and other forms of public harassment, such as making people do indecent things in the name of enforcement.

Finally, it’s the duty of we all to ensure that we have a corona virus-free community, the people should do their part by staying safe at home and ensuring the necessary hygiene practice while the government should do the needful, ensuring her people are enshrouded away from hunger.