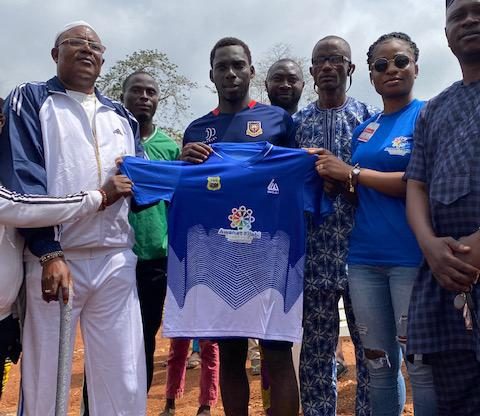 “An heroine is somebody who’s selfless, generous in spirit, one who tries to give back as much as possible”.

An heroine we are referring to is Alhaja Awanat Akinade-Fijabi.

It was another historical day in Akinyele Local Government, to all footballers especially in Sasa domain.

The all-time great philanthropist in Akinyele local government whose name had been written in Gold, in person of Alhaja Awanat Akinade Fijabi had fulfilled her promise made to Akinyele Football Club, by donating jerseys, socks, and other football materials.

In her opening remarks, Alhaja Awanat Fijabi acknowledged and recognised the presence of His Royal Highness, Oba James Oluyemi Odeniran (The Alakinyele of Akinyele Land) and his gorgeous wife, Olori Olajumoke Odeniran, who came to grace the occasion.

Alhaja appreciated and saluted the management of Akinyele Football Club and their coaches for promoting footballers at the grassroot level.

Alhaja Akinade Fijabi concluded that football is one of the sports that unites the whole world.

She also added confidently that she is ready to establish and promote female football club in Akinyele local government.

Alhaja Awanat Fijabi promised to promote the footballers at the grassroot till they reach the apex of their careers by God’s grace.

We will do greater things.

Makinde is a Disgrace to Public Decency, The Office He Holds – Akeredolu

You Are A Productive and Active Son of Ibadanland – Group Hails UI Acting...