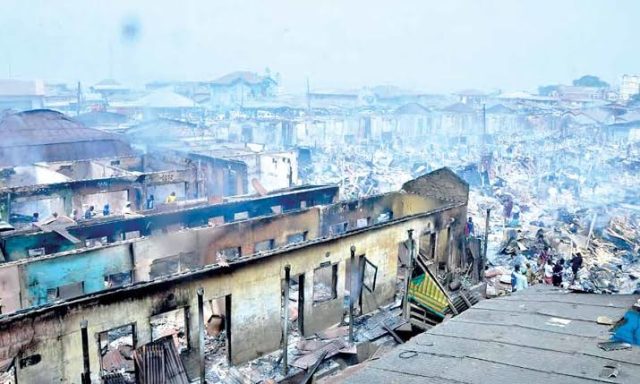 Its exactly TWO WHOLE MONTHS today after that unfortunate Akesan fire incident that consumed the ancient market in Oyo town destroying good and properties worth millions of naira.

Two months after the incident, he fate of the victims still remain uncertain. While some are battling to pick up the little they could barely salvage to move on, some are still bedridden trying so hard to battle the shock of their losses.

Its been TWO MONTHS and nothing has yet been done!

Promises were flying all around from our leaders and ambitious politicians, the people”s hopes were raised believing actions would be expedited towards the reconstruction of the central economy hub of the town but yet, we are still here!

The once fertile land that served economic purposes has become a desert, suffering neglect while the people look on in despair.

The question is, what pragmatic step(s) has the concerned authorities taken so far? Will the reconstruction of Akesan market still continue to be a mirage?

I can remember vividly when Governor Seyi Makinde came to sympathize with market men and women, he made some promises which today he has not redeemed. He assured us of a quick government intervention and what do we have so far?

The Oyo East Caretaker Chairman, Hon. Arowosaye Saheed Adeyemi, promised that makes shift stalls were going to be constructed to at least serve temporarily, his reason for the demolition of the ruins, but what we have are sheds that could barely withstand time and harsh weather conditions constructed individually by the poor market people.

The appropriate quarters are not giving us proper feedbacks. All we are left with are assumptions, rumours and guesses.

So far, we have only received donations from NEMA, the ruins have been demolished and there is a signpost bearing the architectural designs of the proposed new structure. Nothing else!!!

Our people are reduced to weakly constructed sheds constructed by the roadside to earn their means of livelihood. So unfortunate.

What is the fate of our people?
When will Akesan market rise again?
For how long do we continue to look away while our major hub of economic activities waste away?

Our people are suffering! Some are already subjected to poverty and penury, while some are dying on sick beds.

Where is the hope coming from?

We are appealing to the State government to make good its promises to the people of Akesan market. We are pleading for the lives of people who have been finding it difficult to afford a square meal since the catastrophe.

Please, fulfil your promises!
We are sick and tired of waiting. Do not allow our hopes to be dashed!
Come to our aid!

Here is a call to all sons and daughters of Oyo town, all community based groups and organizations to kindly come out to speak for the people!

I am Omo Iya Kunmi, a passionate son of Oyo town!