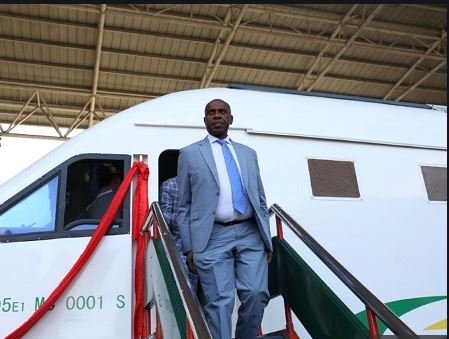 In fulfilment of the promise made to Nigerians that train ride will be made available by December, the Minister of Transportation, Rotimi Amaechi, on Saturday has announced that the free train ride on the Lagos-Ibadan standard gauge will begin on Monday.

Mr Amaechi who expressed his satisfaction that the free train ride will begin rode from Fagba, in Lagos, to Ologuneru, Moniya, which is Kilometre 154, in Ibadan, the Oyo State capital.

The Minister then announced that the free train ride is a promise made to Nigerians for the yuletide, adding that he has directed the contractor to meet with the Nigerian Railway Corporation and Team Consultants to iron out the modalities for the operation.

He said ‘’I am pleased to announce that the free train ride will begin on Monday at Iju, Lagos, and we would run one return trip to Ibadan. This would be the pattern till December 19 and there would be a break on December 20 to allow for the routine inspection.

“From December 21, we expect to run the service twice a day, and by this time we expect that passengers can now board at Agege, and we would be able to take them to Kilometre 157 in Ibadan.”

The minister said the contractor is also committed to delivering minor stations along the corridor before the end of the year.

Mr Rotimi Amaechi who said he would begin the inspection at the Apapa end to keep abreast of the challenges that remains on the project, he expressed satisfaction at the pace of work.

The Managing Director/Chief Executive of the Nigerian Railway Corporation, Engr. Fidet Okhiria, said the corporation and the contractor will be meeting to iron out the modalities for the takeoff of the free train ride.