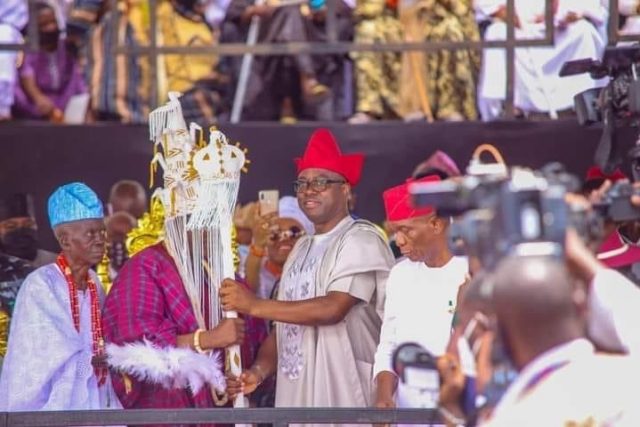 The executive governor of Oyo State, Engineer Seyi Makinde has presented the staff of office to the new Olubadan of Ibadanland, Oba (Dr.) Mohood Olalekan Isbola Balogun (Alli Okunmade II) on the occasion of his coronation.

The presentation, which held at the popular and historic Mapo Hall, Ibadan on Friday, 11th March, 2022 had in attendance, dignitaries from different states of the federation.

OYOMIND recalls that the Olubadan stool became vacant upon the death of the late Oba Saliu Akanmu Adetunji Aje Ogungunniso 1 on January 2nd, 2022.

Sons and daughters of Ibadanland, political heavyweights, monarchs, business moguls, and other dignitaries were present at the venue of the coronation.