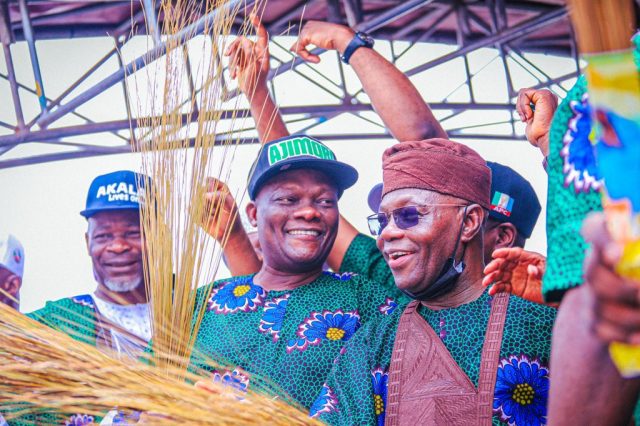 Oyo Central Senator, Senator Teslim Kolawole Folarin has officially declared his ambition to run for the the highly contested office of the Governor, Oyo state today at the Oke Ado Stadium, Ibadan in the presence of High ranking political officers, Ibadan Cheifs and federal security operatives.

Folarin, while officially declaring pay obeisance to the All Progressives Congress, it’s Working Committee, Ajimobi, Akala and Ladoja’s families before the open declaration.

In his Gubernatorial declaration speech which he tagged, “Rescue Mission”, he said, “Your gathering here today signifies one fact: That you are tired of this decadent status-quo that has taken our State back by 1, 460 days. The multitude of your presence at this declaration event can only be a pointer to your vote of no confidence in a political party and an administration that have jointly, severally and progressively taken our state backwards at the whims of the paddlers of our state’s boat”.

He continued, “prior to my declaration, we have received ceaseless calls to rescue our dear state from the claws of one of the most visionless governments ever in her history. On a daily basis, I receive an outpouring of your calls for rescue. I am happy that you followed those SOS calls with action today by following the trail of your cries with action.

Since about three years now, Oyo State people have suffered severally from a government where institutional rigidity, pervasive insecurity, policy summersaults, monumental debt and inoperable economic ideas reign supreme. As Nigerian national challenges persist, our pacesetter state is further embroiled in pervasive deprivations worsened by acute lack of vision to mitigate the effect of the crisis. Despite being blessed by providence with surplus human and capital resources, our people are made to live their lives, feed themselves and their families under severe hardship and excruciating frustrations occasioned by receding opportunities”.

I am determined to rescue Oyo State and her hapless people. I promise to remain accessible and in constant conversation with the people of Oyo state. I strongly belief that it is only through discussions and dialogue with the people that a sense of unity of purpose of a people can spring from and dreams of development can transform into reality”.

He further “urge everyone to join the rescue mission as we embark on restoring the dignity and pace-setting status of the state. Join me to take Oyo State from nadir to the apex of good governance”.