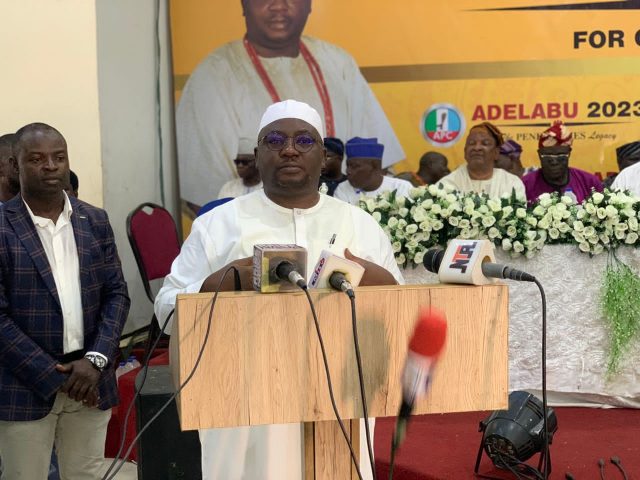 The 2019 All Progressives Congress Gubernatorial candidate, Adebayo Adelabu has begun processes towards his declaration for the 2023 election.

Adelabu, who resigned as the Deputy Governor of the Central Bank of Nigeria in 2019, disclosed his desire to run for the office of the number one citizen in Oyo State in the 2023 general election under the platform of the All Progressives Congress at a press conference held at his political headquarters in Ibadan on Monday.

Adelabu, who was the party’s flag bearer during the last election, maintained that he currently remains the most qualified aspirant across all political platforms to transform the state from its current form.

He, however, maintained that the event was not an official declaration of his ambition.

At the event which had in attendance various chieftains of the APC in the state among which is Abu Gbadamosi; Deputy chairman, Olayide Abass; former lawmakers, Ayoade Adeseun and Saheed Fijabi, among others, Adelabu noted that his gubernatorial ambition is to enrich politics with ethics to the service of humanity within the Oyo state context.

According to him “you will recollect that I voluntarily retired from the CBN to enter the political frame to give Oyo people a First class governance. My past and present is like an open book before you and without being immodest, I have been an excellent performer in everywhere I have served.

Adelabu who lost the 2019 election to the incumbent Governor, Seyi Makinde of the Peoples Democratic Party, maintained that he is more confident to lead the state after gaining insights from the activities of the state in the past years.

“The last 3 years have provided me with the sober opportunity to review our state. After this Introspection, I concluded that our state can be better than it is.”

Speaking further, Adelabu, a son of the late Ibadan political leader, Adegoke Adelabu Penkelemesi, noted that he is confident of his capability to defeat Makinde, who is poised to pick the PDP ticket, at the polls next year.