It is very unfortunate that Brigands and usurpers are back in Government in Oyo State.

Our attention was drawn to the cacophony of falsehoods by the PDP in Oyo State in their ill-advised attempt to spin lies as truth for the public.

While the uninformed might be deceived by this latest PDP rant, let them be reminded that the people of the pacesetter state are better informed than they think they know.

Firstly, they claimed that the Local Government Elections conducted by the Sen Abiola Ajimobi’s administration was illegal for their conjured reasons. The simple question to ask them is which court of law has declared the election as illegal? NONE.

Rather, all the election tribunal that handled resultant petitions, the Oyo State high Court and the Federal high Court that heard the multiple suits filed by the PDP apologists that sought to stop the election were dismissed, either for incompetence, abuse or being illegal. Is it not a joke that PDP will claim that the election were illegal yet cannot point out any court that ever pronounced the election as illegal.

Perhaps, the uninformed arm-chair pronouncement of Gov SEYI Makinde is their definition of what an election is legal. A civilian coup d’etat. Again, the PDP empty barrel claim that the election were held in defiance of a subsisting Court order! Again, we are asking for the said order, if any exists?

This lies of a phantom “Court order” was what Governor Seyi Makinde fabricated to justify his illegal dissolution of Governance structures at the Local Government level.

The question now is for Gov SEYI Makinde to show the world the supposed order of injunction, if any. They cannot, because there was no such order made by any court anywhere stopping the election.

It is an irresponsible attempt to colour the truth to claim that the election ought to have been restricted to the 33 LG councils and not including the 35 LCDA.

If that was a justified excuse, why did the Governor then dissolve both the 33 LG alongside the 35 LCDA?

Furthermore, is Gov SEYI Makinde now arrogating the power of the Judiciary to himself?

If Gov Makinde and the PDP claim that they discovered that a wrong exist, is that not the reason for the existence of the Judiciary?

In any case, the PDP and Gov SEYI Makinde has already disobeyed the subsisting Judgement of the high Court of Oyo State and called it “KANGAROO COURT” and also described the Supreme Court Judgement followed by the High Court of OYO STATE as “arrangee judgement”.

Such is the despised disposition of Gov SEYI Makinde and the PDP for the rule of law in Oyo State and the Judiciary, since May 29th, 2019.

Let no one be deceived by this ill-fabricated PDP bag of lies to justify existing illegalities and their proposed ILLEGAL APPOINTMENT OF CARETAKER ADMINISTRATION IN THE LOCAL GOVERNMENT.

The Courts have pronounced such a law and practice as not only illegal but also unconstitutional.

This has been the pronouncement from Supreme Court down to the recent decision of the Oyo State high Court.

If Gov SEYI Makinde and his PDP were certain of their “Bags of lies”, why not wait for the court of Appeal Judgment.

It is our believe that Gov SEYI Makinde and the PDP are not sure of getting favorable judgment for their case at the Court of Appeal, hence choosing the option of blatant disobedience of the court

Meanwhile, let it be known that OYO STATE APC would not accept any such illegality to be foisted on the good people of OYO STATE,by utilizing all lawful and legal means at our disposal to resist the planned illegal PDP caretaker administration in our LG when elected administration has not completed their Mandate.

If Gov SEYI Makinde chooses to hide under the cloak of immunity, the following categories are not immuned, that is Members of the State Assembly, Attorney General, Nominated Caretaker Members and all their co-conspirators. They shall be made to face the long arm of the Justice swiftly under our laws.

Our dear state in the last eight years has turned full circle of peace, progress, development and justice.

If President Muhammadu Buhari does not disturb Gov SEYI Makinde from enjoying his Mandate, the only ideal antidote to prevent anarchy and chaos in Oyo State is for Gov SEYI Makinde to abide by his oath of office by allowing constitutional rules of the third tier of Government in OYO STATE to flourish.

If Gov Makinde does otherwise, the public must note it that, he willingly invited anarchy and chaos. 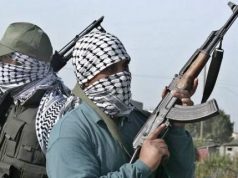 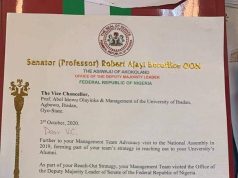