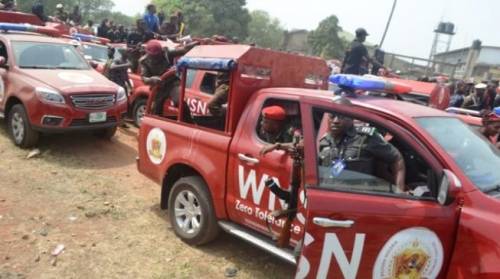 An operative of the Oyo State Security Network, popularly called Amotekun, has allegedly shot dead a 21-year-old student identified as Tosin Thomas around Mokola roundabout In Ibadan on Wednesday evening.

This was confirmed by the state Police Public Relations Officer, Gbenga Fadeyi, in a statement in Ibadan on Thursday morning.

It was gathered that the young lady was going home when two “Yahoo boys” were arguing over their girlfriend. One of them reportedly invited Amotekun to put the situation under control and in the process, one of the operatives of Amotekun mistakingly shot and killed Tosin Thomas while trying to settle the rift.

The victim was reportedly rushed to the university teaching hospital where she later died on Thursday morning.

Following the development, the deceased’s elder siblings brought the remains of the 21-year-old Tosin Thomas to the spot where she was killed in demand for justice.

The Polytechnic Ibadan holds Elections for Governing Council and Board of Studies, SEE RESULTS