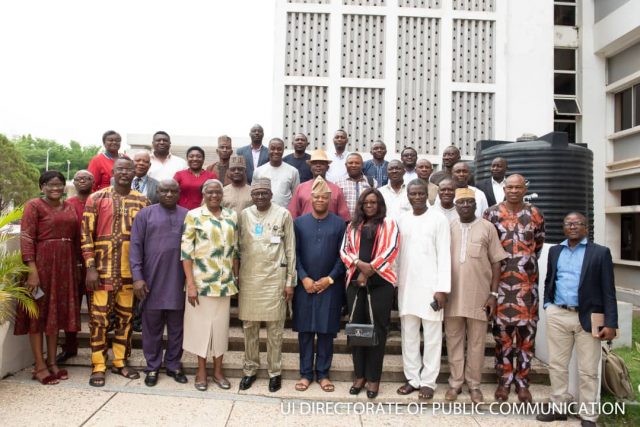 He made the call during a courtesy visit paid to his office by the participants of the Masters degree programme in Strategic Studies of the Department of Peace, Security & Humanitarian Studies of the Faculty of Multidisciplinary Studies.

He noted by virtue of their exalted positions in the nation’s Security Services, the participants are well placed to add value to the University of Ibadan.

Professor Adebowale stated that UI is very proud to be involved in the training of the officers who had earlier spent one year at the Nigerian Defence College.

The participants were drawn from among top officers of the Nigerian Army, Nigerian Airforce, Nigerian Navy, Nigerian Security and Civil Defence Corps, Directorate of State Security, Defence Intelligence Agency, Economic and Financial Crimes Commission and the Ghana Army. They will be the last set to receive lectures on the UI campus because the MOU had been amended to allow the participants henceforth, receive all their lectures at the Nigerian Defence College but from Faculty drawn from UI.

Professor Adebowale recalled his participation in the Senior Executive Class 39 of 2017 at the Nigerian Institute of Policy and Strategic Studies, Kuru and stated that he benefited immensely from the military training. He remembered with nostalgia that he was the Rapporteur General of the class, a job which saw him compressing over 4000 pages of material to a presentable document.